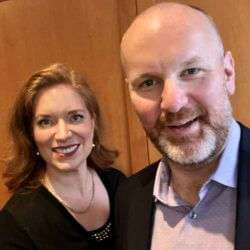 Based on your positive feedback, I know many of you have already listened to last week’s ? podcast on COMPELLING PRESENTATIONS with Andrew Musselman and you’re looking forward to next week’s episode on PRESENTING WITH CONFIDENCE.  In case you haven’t listened to it yet, here’s the link again.

Given Andrew Musselman’s recommendations and given our physical isolation these days, I thought we’d focus this week on TED:

How familiar are you with TED?  Here’s your primer!

TOP 10 TED Talks OF ALL TIME

Instead of wasting your time on social media, video games or Netflix, how about watching a TED Talk?

Here are the top 10 TED Talks of all time, along with their official Ted.com descriptions.  Each of these 10 TED Talks has been viewed between 25-65 million times!  Well worth your time⏱… they’re only 18 minutes each!

?THE PUZZLE OF MOTIVATION
Dan Pink

Career analyst Dan Pink examines the puzzle of motivation, starting with a fact that social scientists know but most managers don’t: Traditional rewards aren’t always as effective as we think. Listen for illuminating stories — and maybe, a way forward.

9️⃣LOOKS AREN’T EVERYTHING.  BELIEVE ME.  I’M A MODEL
Cameron Russell

Cameron Russell admits she won “a genetic lottery”: she’s tall, pretty and an underwear model. But don’t judge her by her looks. In this fearless talk, she takes a wry look at the industry that had her looking highly seductive at barely 16 years old.

Suspicious emails: unclaimed insurance bonds, diamond-encrusted safe deposit boxes, close friends marooned in a foreign country. They pop up in our inboxes, and standard procedure is to delete on sight. But what happens when you reply? Follow along as writer and comedian James Veitch narrates a hilarious, weeks-long exchange with a spammer who offered to cut him in on a hot deal.

Jill Bolte Taylor got a research opportunity few brain scientists would wish for: She had a massive stroke, and watched as her brain functions — motion, speech, self-awareness — shut down one by one. An astonishing story.

Have you ever felt like you’re talking, but nobody is listening? Here’s Julian Treasure to help. In this useful talk, the sound expert demonstrates the how-to’s of powerful speaking — from some handy vocal exercises to tips on how to speak with empathy. A talk that might help the world sound more beautiful.

“Bonk” author Mary Roach delves into obscure scientific research, some of it centuries old, to make 10 surprising claims about sexual climax, ranging from the bizarre to the hilarious. (This talk is aimed at adults. Viewer discretion advised.)

Brené Brown studies human connection — our ability to empathize, belong, love. In a poignant, funny talk, she shares a deep insight from her research, one that sent her on a personal quest to know herself as well as to understand humanity. A talk to share.

Simon Sinek has a simple but powerful model for inspirational leadership — starting with a golden circle and the question: “Why?” His examples include Apple, Martin Luther King Jr. and the Wright brothers …

2️⃣YOUR BODY LANGUAGE MAY SHAPE WHO YOU ARE
Amy Cuddy

Body language affects how others see us, but it may also change how we see ourselves. Social psychologist Amy Cuddy argues that “power posing” — standing in a posture of confidence, even when we don’t feel confident — can boost feelings of confidence, and might have an impact on our chances for success.

Sir Ken Robinson makes an entertaining and profoundly moving case for creating an education system that nurtures (rather than undermines) creativity.

Which TEDTalk is your favorite?
Please ? email me to let me know!

Based on Andrew Musselman’s recommendation, I recently read and listened to the book, “TALK LIKE TED” by Carmine Gallo.

What a worthwhile read!   Author Carmine Gallo conducted a meta-analysis of the top TED Talks and interviewed many of the speakers to deduce “the 9 public speaking secrets of the world’s top minds.”

Gallo provides examples and instructions for each of the 9 secrets. I won’t give the secrets away, but I will tell you that the best TED Talks are:

I have a question for you.

A question that struck me as I was reading Talk Like Ted:

“Based on your personal passions,
experiences, and expertise,
what would YOU talk about
if you were to take the TED stage?”

You can ponder that question as you read the Talk Like Ted book, watch the top 10 TedTalks, and listen to the COMPELLING PRESENTATIONS podcast.  Lots to keep us busy, right?  ?

I hope you’re surviving, and perhaps even THRIVING, in this physically distant world.   Speaking of physical distance, last week I received an email from a Talk About Talk listener in Brisbane, Australia (!!!) asking me to use the term PHYSICAL distancing instead of social distancing.

As you may know, I am a big advocate of this. However, I haven’t been 100% consistent. For example, in our Talk About Talk Facebook group, our theme was “Thriving at a Social Distance.” So I just changed it to “TALKING at a Physical Distance”:

Better, right?  I hope you’ll join us in the Facebook group, where we’re talking about:

Until next week when we focus on PRESENTING WITH CONFIDENCE, I hope you stay safe and stay social (at a physical distance)!

P.S. – Is your email still stressing you out? If you haven’t already, don’t forget you have FREE access to the new Talk About Talk course: “5 Quick Email Hacks to take control of your Inbox.”  And you can send it to a friend by sending them this email.  Thank you!

#47 HOW TO DELIVER A COMPELLING PRESENTATION with Andrew Musselman

This website uses cookies to improve your experience while you navigate through the website. Out of these, the cookies that are categorized as necessary are stored on your browser as they are essential for the working of basic functionalities of the website. We also use third-party cookies that help us analyze and understand how you use this website. These cookies will be stored in your browser only with your consent. You also have the option to opt-out of these cookies. But opting out of some of these cookies may affect your browsing experience.
Necessary Always Enabled
Necessary cookies are absolutely essential for the website to function properly. This category only includes cookies that ensures basic functionalities and security features of the website. These cookies do not store any personal information.
Non-necessary
Any cookies that may not be particularly necessary for the website to function and is used specifically to collect user personal data via analytics, ads, other embedded contents are termed as non-necessary cookies. It is mandatory to procure user consent prior to running these cookies on your website.
SAVE & ACCEPT